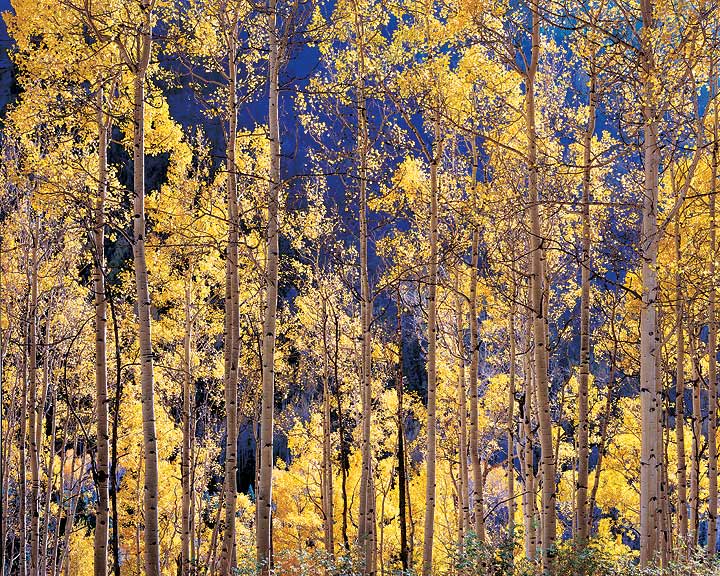 In 1997, Ruth and I went on our annual fall photo trip, traveling first to Colorado, then on the east coast. We happened upon Colorado at just the right time for the changing of the Aspen trees. The aspens slowly change color but after they reach peak color, the leaves hang on by only a thread and one windstorm will drop them to the ground overnight. Also, they’re not called “quaking aspen” without a reason, as even the slightest breeze will cause every leaf to flutter and shimmer in the wind. So it is necessary to have no wind, not even a slight breath, in order to have a sharp photograph. As you can imagine, this is not easy to come by in the Rocky Mountains in the fall!

That fall, we photographed for about a week in Colorado, traveled up and down the mountains throughout the state. At the beginning of that week, the leaves were at or near peak color and at the end of the week, they were all on the ground. We were fortunate to come away with a few good images, including this one and Radiant Mountain Aspen.

This image was taken just outside of Telluride, on the road that goes to the gold mine east of town. It was a hot afternoon and Ruth and I were looking for a place to rest up a bit from our travels. The road runs right along the side of the steep mountain slope. We parked along the side of the road and took our miniature schnauzer, Smoky, for a walk. I was struck by the beautiful light coming through the trees, which was made more luminous by the deep blues of the distant mountainside in shadow. I knew that if the wind would allow, that this was a rare photo opportunity.

The exposure of the film was critical, as the tonal range of the scene surpassed the ability of the film to record all of the values. Even so, I knew that it was only barely printable, even using extraordinary masking techniques. I was not sure if it was possible, but the scene demanded photographing! I used a 300mm Schneider Apo Sironar-S, a modern, highly-corrected lens. The camera was set up and carefully leveled, using the rising front to nearly its full extension. This avoided any keystoning effect and gave the required composition. I exposed three sheets of film, using the same exposure for all of them, in order to insure against any subject motion.

As expected, the transparency was extremely difficult to print. I could probably not have printed it even a year or two earlier. I had to remake the contrast mask numerous times. The problem lies in the extreme contrast of the transparency. When reducing the contrast, it is an extremely fine line between having an image which is too flat and loses shape and brilliance and one that is too contrasty and unprintable. Even so, very precise dodging and burning is required in order to make the final print. Each one is quite difficult to produce, treading a fine line to achieve maximum luminosity in every part.

To me, the golden leaves in the final print, surrounding the progression of trunks in the foreground, appear almost as flames, set against the cobalt blues of the background. To me, there is a sense of that “fire of life” which breathes life into all of creation.