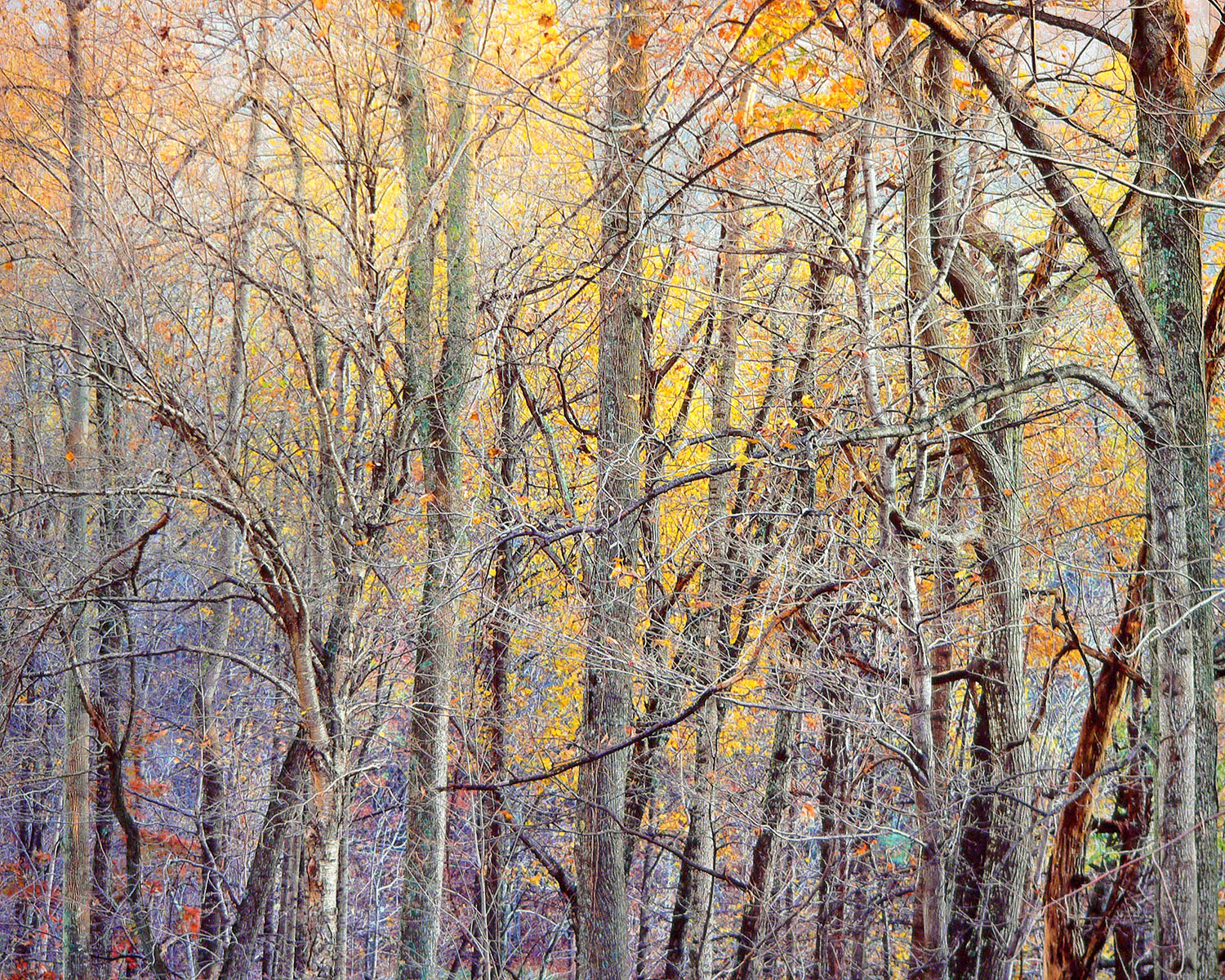 In 1989 Ruth and I went on another photo trip around the country for three months. On November 1st we found ourselves in Virginia, camped out in the beautiful Shenandoah Forest.

As usual, we were up before dawn looking for a potential photograph. The woods were dense and visually complex with many different species of trees. The sun was beginning to rise and I was not having an easy time finding a worthwhile composition. When I finally found this composition, it was a mad dash to get the image onto film before the sun’s rays blasted the entire scene with extreme contrast.

I used the rising front on the camera to avoid converging verticals and as I focused on the ground glass I saw that the sun was beginning to strike the tops of the trees. Basing my exposure on the readings from my 1° spotmeter I knew the contrast of the scene was almost beyond the range of my transparency film to record all the values. I had to base my exposure on the sunlit tree tops to keep them from losing detail but that meant the rest of the image would be much darker than I wanted. I didn’t know if I’d be able to make a Cibachrome print which would reproduce the illumined forest I was experiencing so I’d need to figure that out later.

Using my Goerz 24” Red Dot Artar lens at f/64 I made a 6 second exposure on Fujichrome 100 film. Back in Oregon a month later, when I saw the processed transparency I was discouraged. The sunlit top of the image looked good but the lower 3/4 of the image was dark and sullen. Not at all the effect I was looking for. I loved the image but it had to glow.

I had been making contrast masks for six years and had progressed in my technical abilities through experimentation, film and developer calibrations and lots of experience. I wanted to hold the lightest values without them becoming pasty while I raised the darker values that would normally print as Zone III (very dark) to Zone VI (light skin tones). Could this be done?

It helped that I used to professionally operate drum scanners (Hell and DS Screen) and did dot etching, which gave me deep understanding of tone reproduction. I could visualize what I wanted but didn’t know how to do it. I spent about a week making and studying tone reproduction curves and creating unique types of contrast masks to make a series of test prints. It wasn’t easy but I finally got the results I was looking for: the sunlight filled the scene and the luminous trees had shape, form and depth.

Later, I was able to utilize this knowledge to make Cibachrome prints of other high contrast transparencies. Out in the field I was now able to confidently photograph these scenes, knowing I could successfully raise the lower values in my darkroom. From my experiments using both analog and digital materials, I learned that significantly raising lower tonal values while maintaining tonal separation throughout the scale in a natural way is most successfully done with film and analog printing materials.

The final Cibachrome prints are filled with the light I saw and experienced that morning. The tapestry of the forest seems to be filled with life, dancing and rejoicing.