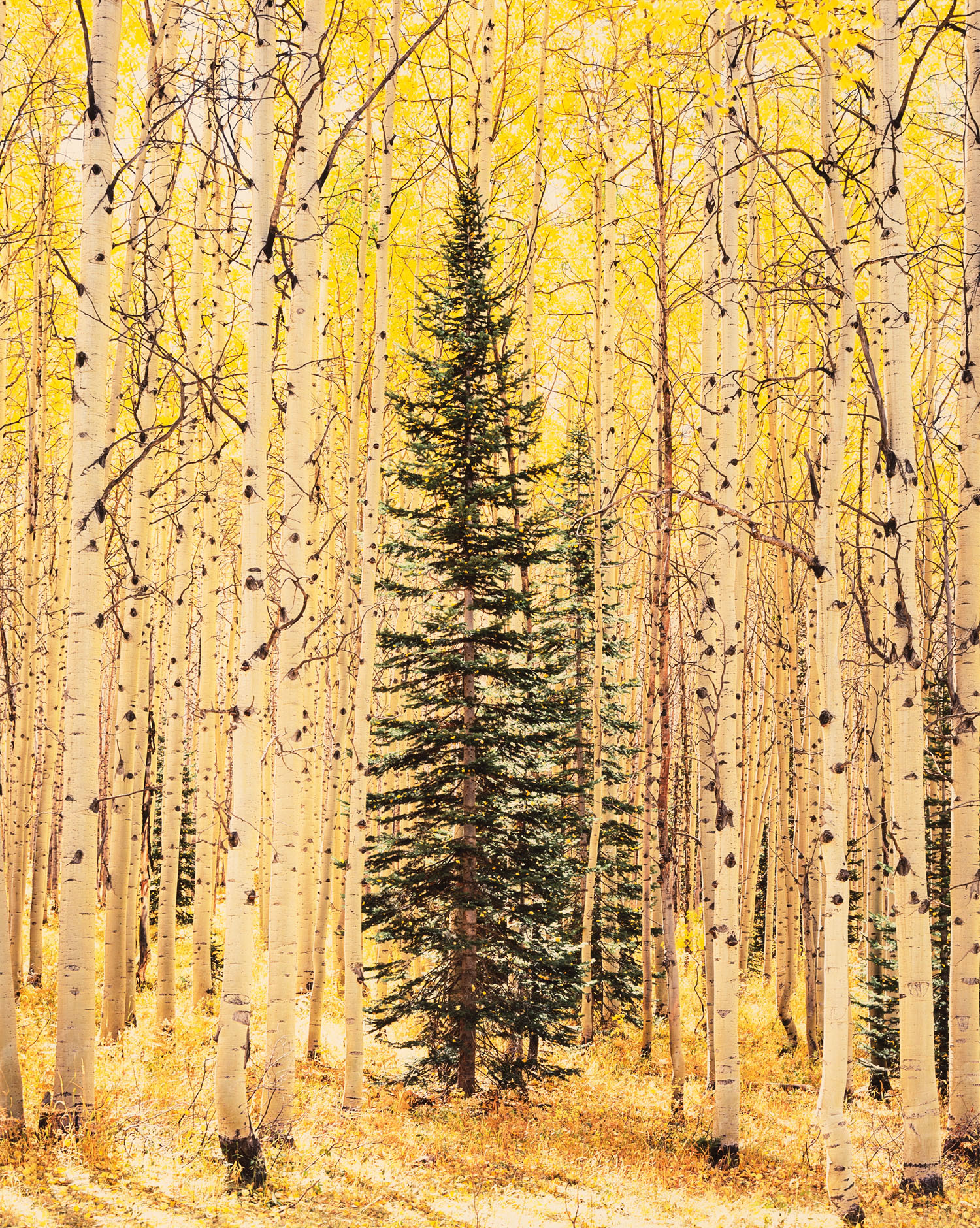 In 2007 Ruth and I went on another photo trip in our camper van, starting in mid-September we began to photograph in Colorado. We first photographed in the McClure pass and Gunnison Canyon areas. Ruth then drove me to the Denver airport, where I flew to New York City for a gallery opening in Soho, returning two days later.

We then went back to McClure pass where I happened to meet and talk with a photographer from Colorado who was using a 4x5 camera. He recommended we check out the large aspen forests which grow in the Kebler Pass area only 45 miles away. We thanked him and drove there that day. We were astonished by the size, density and luxurious beauty of the aspen forests and I was thrilled with the potential for some terrific photographs. Over the years we’ve explored virtually every aspen forest in Colorado and found that none of them come close to the beauty and size of the Kebler Pass aspens.

We were blessed with perfect weather: full sun and no wind. While full sun is too contrasty for most forest scenes, it works beautifully with the white aspen trunks, yellow leaves and dried grasses on the ground. We photographed there for seven amazing days. The area of best photographic potential was only about 12 miles along the main gravel road with various small dirt side roads here and there.

As I became more familiar with the area and how the light changed throughout the day, I would make mental notes of specific scenes and could fairly accurately predict what time of day the lighting would be best to photograph each place.

This photograph was made on the third day we were there at approximately noon. The high sun removed any strong tree shadows and totally filled the scene with a beautiful combination of backlighting and reflected light which filled the scene. I used a 360mm lens at f/45 for two seconds on Provia film, using the rising front on the camera to keep the trunks vertical.

One of my goals in photographing this scene was to convey a sense of that remarkable enveloping light that I was seeing and experiencing. In the final print my goal was that the central conifer would be clearly illumined by that light but also provide a strong visual contrast which would increase the tonal separation in the lightest tones and colors around it.

The print requires extremely delicacy in printing. The contrast mask has to be precisely the right contrast and density, the overall color balance is extremely critical and considerable dodging and burning has to be done on each print to harmoniously balance out the tonalities and achieve the maximum amount of luminosity.

In those seven almost dreamlike days of photography I made 15 photographs with my 8x10 camera, five of which ended up as exhibition Cibachrome prints plus one more taken with my Hasselblad camera. That week in 2007 was one of the most productive of my career and that glow from that time, like the glow in this photograph, returns to me when I think back to those days.