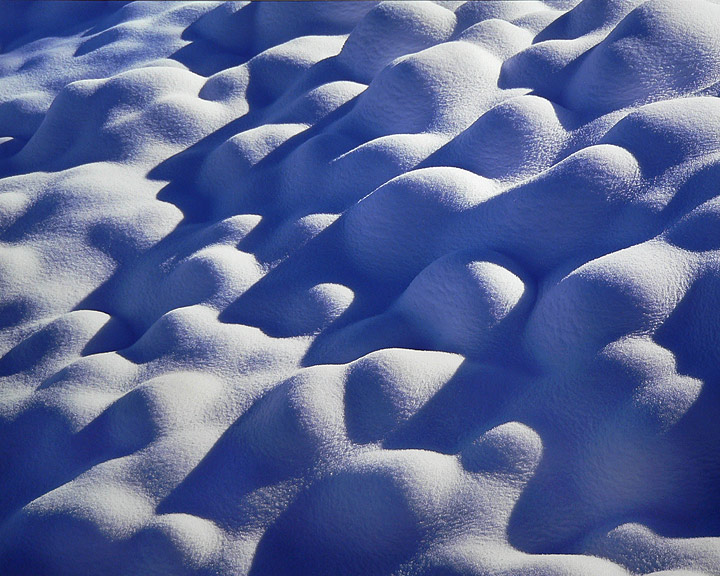 When returning from an autumn photographing trip in 1989, my wife Ruth and I were spending the night in Ogden. While traveling, I carry with me a weather radio, which picks up the NOAA weather broadcasts across the country, 24 hours a day. In the early evening, as was my usual custom, I tuned in to see what the weather would be the next day.

The big news was that a storm watch and a “traveler’s advisory” was in effect—a storm front was moving in that night and was projected to dump 24-36” of new snow on the mountain passes. I spoke with Ruth, and we agreed to get a few hours sleep and then head up over the mountains to Wyoming and the Teton Mountains.

Arising at 3:00 am, we loaded the car and headed north and east, up over Logan Pass, past Bear Lake headed towards Jackson. The snow was coming down thicker and thicker and piling up on the roads. Fortunately, we had our trusty Toyota 4-wheel drive wagon but with rather worn tires. We slowly traversed the snowy mountain passes, carefully inching our way forward through the blizzard. We entered Jackson Hole at daybreak to the incredible vista of 24-30” of fresh snow on everything.

The day dawned clear, cold and bright. The storm had passed on, leaving a calm and quiet peace. The sky was a deep, brilliant blue and the temperature was 20° below zero. We drove around and I made a number of worthwhile photographs in the valley.

This was one of the images taken on that excursion. It is river stones, next to the Snake River, taken from one of the many small bridges which cross the river. I saw the light falling across the stones and saw that it would probably improve within a few minutes. I rapidly set up the 8x10” camera and worked carefully to insure enough depth of field. The shadows lengthened as I composed the image and it was a close race.

I used my Fuji 600mm C lens at f/45. This image is one of the few that I have which is on Kodak Ektachrome 100 film. At the time, Fuji had “improved” their Fujichrome 100 film and there was a real problem with magenta highlights which would have ruined this image.

I first printed this in 1990, using a highlight mask and then a contrast mask and I used it as the introductory photo for the winter section of the Robert Frost Seasons book.

In 1997, I reprinted the image and achieved a significantly better print. Due to many incremental advances in the seven years, I was able to incorporate many technical improvements, as well as bring a deeper esthetic understanding of what the image needed to look it’s best.

The image speaks of softness, sensuality, strength and, of course, light.