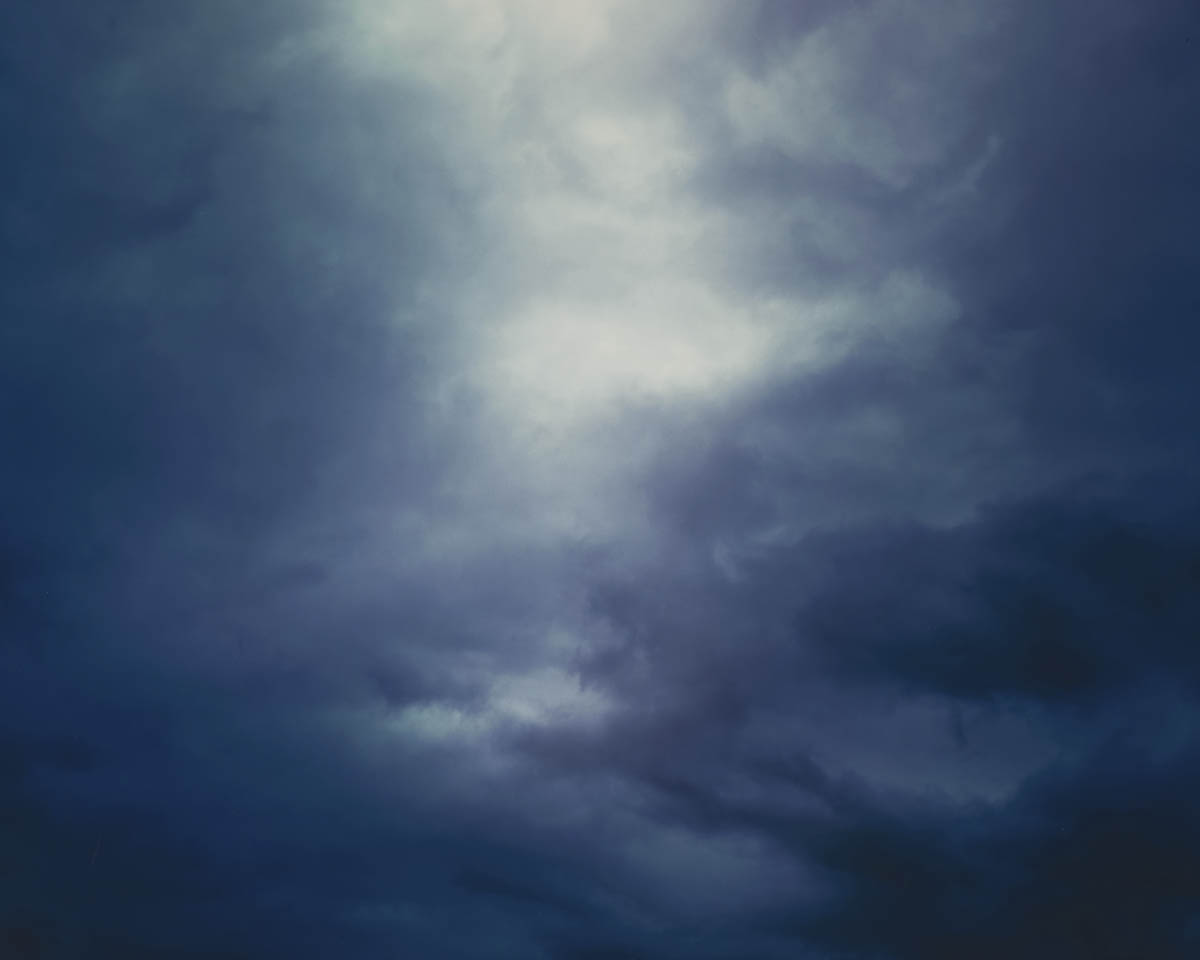 In 1989 I returned to the Stinehour Press in Lunenburg, Vermont to give more advanced training in scanning prints and transparencies on a professional DS Screen drum scanner. I drove there in June and worked until September, when Ruth joined me and we went on another three month photo trip around the country.

This image was made on the front lawn of the Stinehour Press. It was a balmy August evening and as the sun was getting lower in the sky I noticed rolling bands of bright white areas against the early evening’s dark clouds.

It looked like waves on the ocean, viewed from underneath. Several years later I was flying across the country when I saw the same phenomenon from above. The clouds were indeed formed in three dimensional waves and the setting sun was lighting up only the crests of the waves.

I quickly set up my 8×10 camera but had to focus it on distant trees on the horizon because there was no way I could focus on the rapidly swirling clouds. Then I tilted the camera up to the sky until I found the area with the best chance of a composition.

An 8×10 camera has no viewfinder. You must compose the photograph on the (upside down) image on the ground glass, then to make the exposure you close the lens down, cock the shutter, put a film holder in the back of the camera, pull the darkslide and actuate the shutter. So I had to be able to mentally visualize precisely which area of the sky I was photographing. Not an easy task since there were no stable reference points, only moving clouds.

Waiting for an opportune moment, I used my Nikkor M 450mm lens to take one exposure at 1/60 second at f/16 on Fujichrome 100 film. The readings from my 1° spotmeter told me that there would be a dramatic contrast range that could be recorded on the film, which I confirmed when I saw the processed film a few weeks later.

The 8×10 transparency was beautiful but would be difficult to print. It wasn’t until 2015, when I was preparing for an abstract images show at Photography West Gallery in Carmel that I took a deep breath and prepared to “Cibachromize” the image.

In 2002 I had purchased a second horizontal enlarger, a Durst 2506 model that came with a full set of stretch carriers. The 8×10 stretch carrier grabs all four corners of the film and applies equal tension to all of them to hold the film flat in the enlarger. The usual way of printing is to sandwich the film and mask(s) between glass but this can create Newtons’ rings (concentric swirly rings) that ruin the image and have four more surfaces to collect dust.

It took over two long days in the darkroom before I finally achieved what I hoped for the summer evening 16 years earlier. The Cibachrome prints have astonishing luminosity and depth and for me a very powerful otherworldly quality. Silent Light was the name which came to me as I contemplated the finished prints.