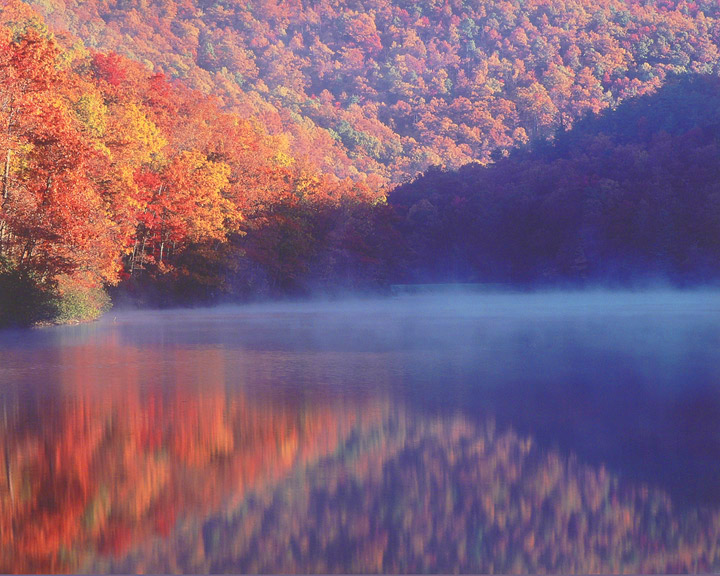 In 2000 Ruth and I discovered the Sherando Lake area of Virginia where I was able to make the “Glowing Autumn Forest” photograph. We returned in 2003 but it was a poor year for color, and windy and rainy to boot. This was 2006 and everything was looking good. We spent two days there and this image was made at sunrise on the second day.

The air was a bit chilly, typical for the end of October. The sky was clear and there was just a bit of light wind at sunrise. We parked our camper van close to Sherando Lake and I walked around looking for a photograph. There was only a whisper of fog on the lake, not as much as when we were there in 2000 when the fog drifted into the woods and enabled me to make “Glowing Autumn Forest.”

Nevertheless, I could see that the scene had potential. The hillside shadow was shrinking and moving to the right as the sun was rising. I called Ruth on our two way radios and she began to get the equipment out of the van. I grabbed the 8×10 camera case, (which had the lens I planned to use), and the tripod and asked Ruth to bring the case of film holders. There was not a moment to lose.

I quickly set up the camera and composed the image. I focused it with Ruth’s help: closing the lens at the f/stop I would call out, opening it for me to make focusing adjustments and repeating the process over and over until I was sure everything would be in focus. I then took spotmeter readings while Ruth dusted off a film holder. I put it in the camera, cocked and fired the shutter three times to make sure its speed would be correct, pulled the dark slide out of the film holder and used my 800mm Apo-Tele-Xenar lens at f/32-2/3 for a one second exposure on Velvia 50 film. Ruth somehow found time to take a photo of me taking the photograph.

When we got home after that trip this was the first image I printed from our trip and was able to ship it to galleries by the middle of November.

The Cibachrome print has a wide range of colors and tonalities and the abstract quality of the reflections gives an impressionist feeling to the lower part of the photograph which complements the sharp, brightly lit forest. It gives a depth to the print that it wouldn’t otherwise have. 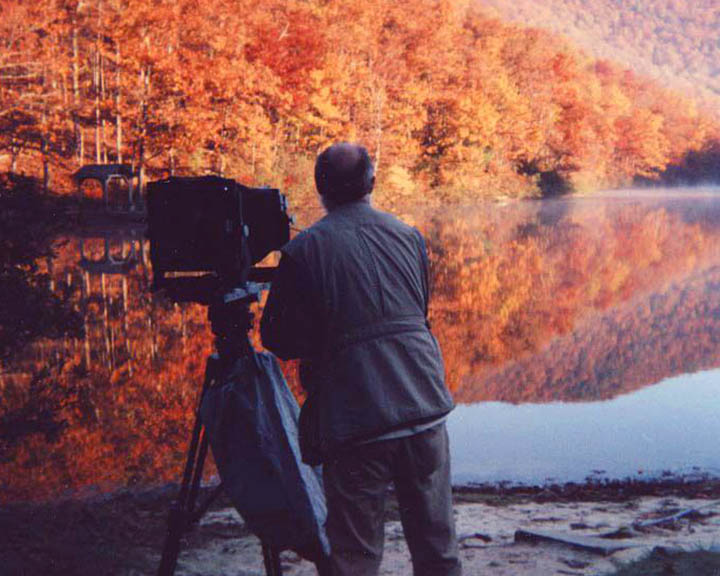