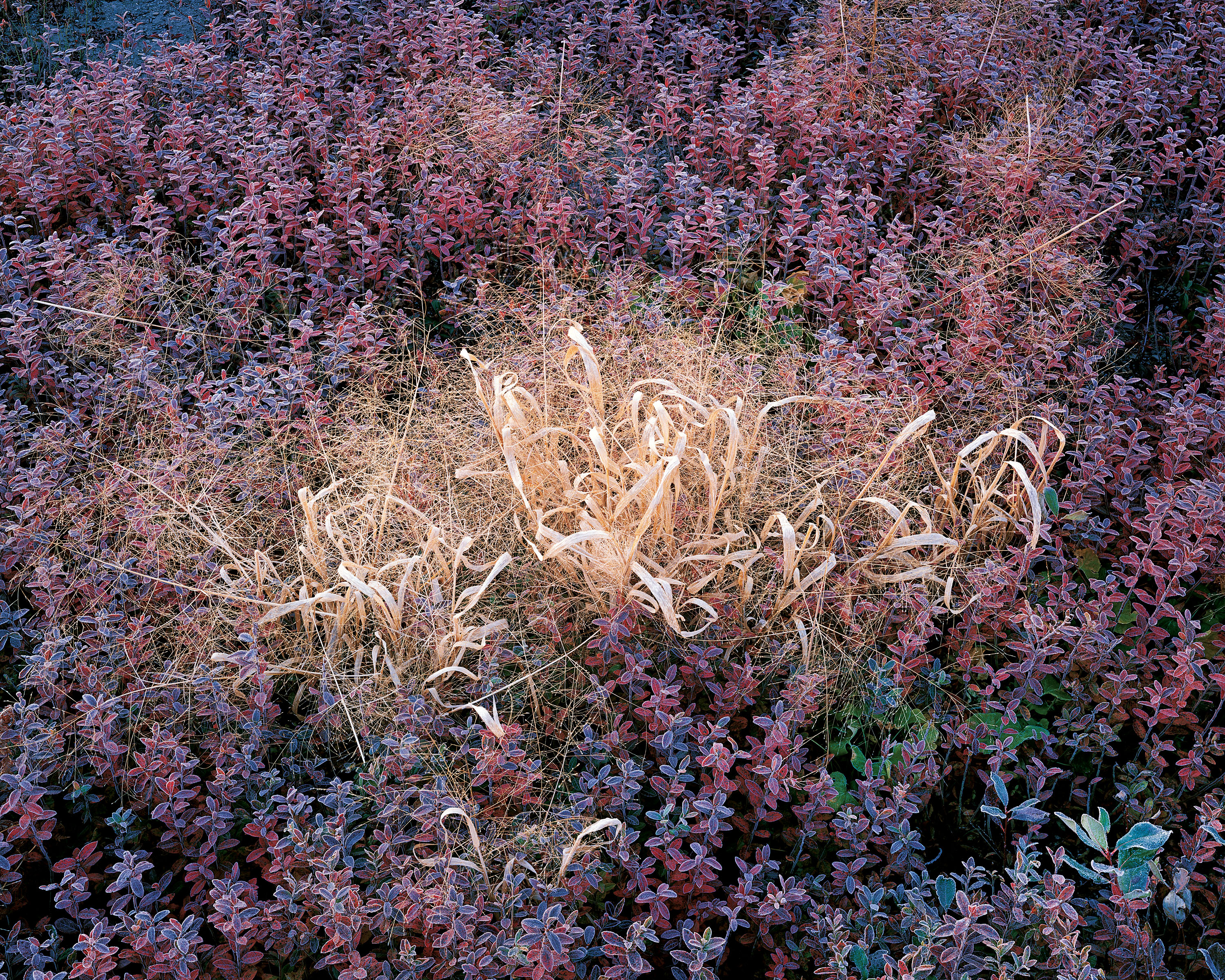 In the fall of 1994 I headed east to photograph. Each year, I try to go to new places, in addition to returning to locations which I’ve found to have real photographic potential. Each place in the world has unique foliage and lighting conditions, which give a unique palette to photographs taken in these areas.

In 1994, my destination was the blueberry fields of Maine. Often times, (perhaps most times), the photo destination does not prove productive, for various reasons. Quite often, the best photographs of a journey are taken on the way to or from the point of (supposed) interest. Happily, this was not the case for the blueberry fields.

After reaching the state of Maine, I traveled about for several days, in search of colored fields. I found a few, but most fields were extremely flat and were limited in their photographic potential. Near the northern border of the state, near the town of Meddybemps, I found the field I had traveled 4,000 miles to see.

It was a field owned by a Mr. Gillespie, who kindly allowed me to photograph it from the road. We camped out a few miles from the field and photographed it for at least three days. I exposed more film while photographing this field than I have on any other subject, before or since—using over 50 sheets of 8x10 film.

I discovered that the best time for photographs was right at sunrise, when the frost was still on the leaves and the light was warm and angled. During this time, I photographed another image, Sunrise and Autumn Blueberries, which has proved to be extremely popular.

This image was taken less than 50 yards from the Sunrise photograph, on the same morning. The sun had not yet risen, and these blueberries lay in a shallow ditch which ran next to the field. I used my Nikkor 240mm W lens, at f/45. The camera was tilted almost straight down, and the swings and tilts, (both front and back), were used extensively. I had to work fast as the sun rises quickly in October. I had to give an additional +1 stop exposure correction due to bellows extension.

The print is extremely difficult to print properly and required at least four days of printing before achieving the results I was looking for. I made several different masks, changing the contrast and tone reproduction at least five times. Additionally, finding the correct color balance took considerable time and materials—I’m sure that I used at least 15 full sheets of paper making work prints. Delicate balance is required for the print to have the right feeling. I reminds me visually of calligraphy—almost becoming “letters of light” as the shapes, forms and colors move across the image.