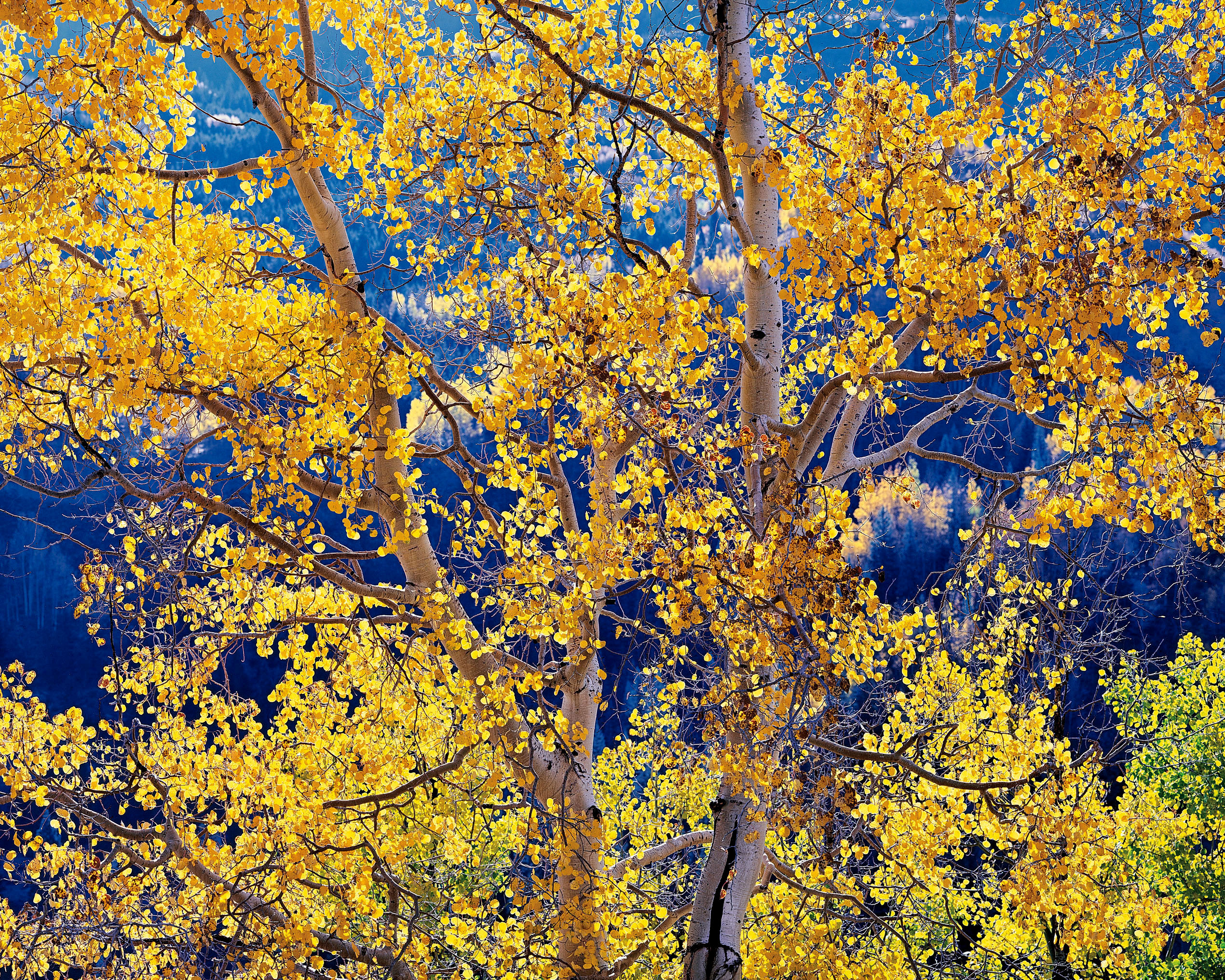 Ruth and I traveled to Colorado in October of 1997 to photograph. The first day we began at the Grand Mesa area with limited success, then a second day around Telluride, where I made the “Telluride Aspens” photograph. We then spent the night camped out around Lizard Head Pass.We were still getting used to the high altitudes and carrying around the 8x10 equipment was especially tiring lugging at least 80 pounds of equipment to whatever scene was to be photographed.

The third day I photographed “Beaver Lodge at Sunrise.” The fourth day found us between Silverton and Durango where I came across this rather remarkable scene. This was one of those images that I instantly knew exactly what image to take and what lens to use. I had no doubt about where I should set up my tripod.

This tree was perched on the edge of the mountain cliff with the aspen leaves were totally backlit in the rising sun. The 9,000 foot elevation meant that the intense blue sky would illuminate the valley below and provide a vivid color contrast to the bright yellow leaves. The air was perfectly still and my biggest concern was that convection currents could come up from below and rustle the leaves. If that started it wouldn’t stop and this image would be lost forever.

The sun was still so low in the sky that even with a compendium lens shade the sun was hitting the lens and creating a huge amount of flare which was ruining the image. Fortuitously, the main trunk on the right extended almost straight up, so I moved my view camera to place its shadow directly over the lens opening which completely eliminated any flare.

I carefully but quickly composed, focused, metered and exposed one piece of film and was pleased to see that the wind was still dead quiet. Knowing this image had great potential, I wanted to do a backup shot but had to move the camera to keep the shadow doing its job and recompose the image again. I was successful in making the backup shot and one more (again moving the camera) for good measure. As it turned out, all three photographs are so similar that I’m not sure which one I chose to print. A 600mm lens was used at f/45 at 1/2 second for all three pieces of film. I precisely calibrate my view camera lenses and have plus or minus exposure compensation factors for each shutter speed marked on each lens board.In this case, the actual exposure was f/45–1/6, since the exposure was going to be 1/6 of an f/stop longer than 1/2 second.

In three days I had three unique and successful images which is not that uncommon on a photo trip. I often go two weeks or more without even setting up the camera, wondering if I’m ever going to get another photograph. Then everything comes together for a series of great images in a few days. Or it doesn’t.

There’s a certain amount of mystery to the creative process which is undeniable but difficult to explain. You can’t force it, you can’t be passive. There has to be an openness to inspiration, clarity and intuitive understanding. And lots of patience.