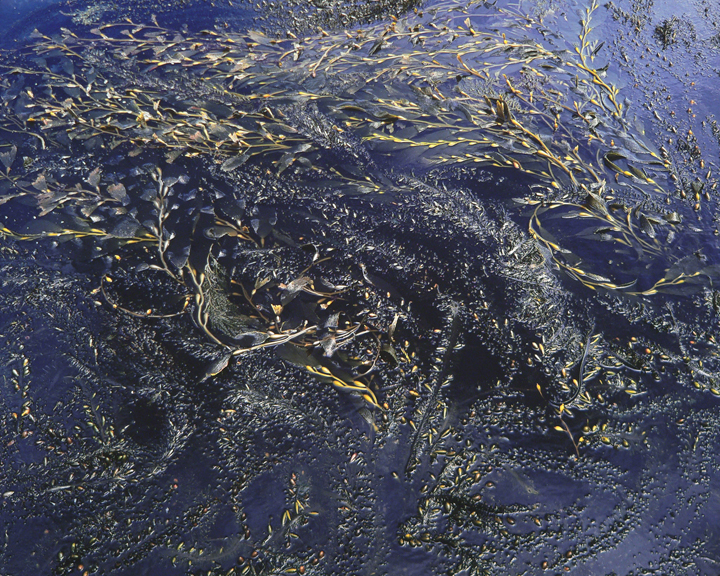 In July of 1992 Ruth and I drove to Carmel where I was having an exhibition at a gallery. We brought my cameras and spent a few days photographing in the area, eventually finding ourselves at Point Lobos, for many years a lodestone for landscape photographers.

While Point Lobos has fascinating rock formations and photographic potential in the actions of waves and rocks, what I was drawn to was the sea kelp which grows in the ocean forests on the south side of the peninsula. On that day the ocean was calm and low swells moved water in and out of the cove, with no breakers in the deep water at this spot. The tide was low, the sun was hot and the kelp moved in and out, swaying in unison with the sloshing movement of the water.

It was a perfect subject for an 8x10 photograph but it was not going to be easy. The obstacles were numerous and significant. The kelp was in nearly constant motion, only briefly pausing at the end of each cycling of water in the cove. To avoid a blurred photograph a fairly high shutter speed would be necessary, activated at the moment the kelp was momentarily paused. To be able to use a faster shutter speed the lens would have to be more open than usual which meant there would be less depth of field. Yet the water and kelp weren’t just moving back and forth but also up and down as the swells came and went. It would be necessary to predict what the water level would be when the exposure was made because of the limited depth of field. Focusing on the ground glass was difficult and actually dizzying, as the water moved up and down, back and forth. Another complication was that a view camera has no view finder so once I had the image composed I had to memorize exactly what area I would be photographing but there were no landmarks, only constantly moving kelp and each movement of the water resulted in slightly different compositions. Nevertheless it was worth a try as I really wanted to get this image in what Ruth sometime refers to as my “magic box.”

I was able to use the view camera swings and tilts to precisely align the plane of focus with the water at the time when the kelp swayed all the way to the left when the water came in. The kelp swayed almost 180° to the right as the water moved out so this was not as easy as it may seem. Calculating the exposure with my 1° spotmeter was problematic because I couldn’t get a reading of the golden kelp. The bright pieces were too small and in almost constant motion but I found some larger pieces nearby and that, combined with my reading of the dark water was sufficient.

I stopped the lens down, closed and cocked the shutter and waited for several in and out cycles until the kelp moved into position. l used my 450mm lens Nikkor-M at the relatively open aperture of f/16 at 1/4 second on Fujichrome 100 film and made one exposure. Despite the above-mentioned difficulties, when I examined the film weeks later the image was in perfect focus with no blurring. It was exposed correctly and was the composition I had visualized.

Although I had the image on the film it had to wait twenty years until 2012 when my technical expertise and esthetic understanding had developed enough to allow me to finally make a Cibachrome print which expressed what I saw and felt that warm summer afternoon.

As I contemplate the final 30×40″ prints I see more than just sunlit kelp in the midnight blue water, thus the title. It is one of my favorites.