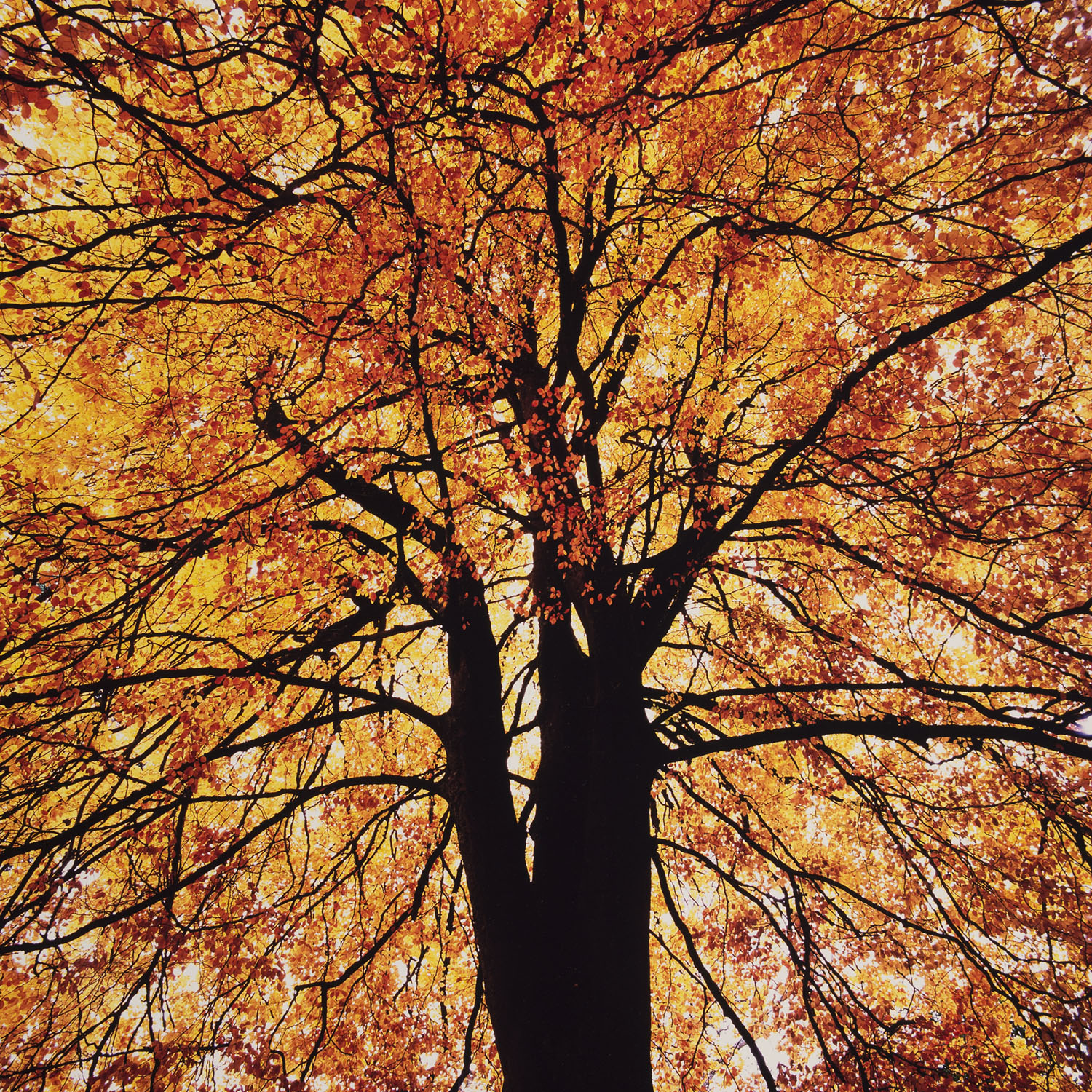 Around 1995 I became aware of Joichi Hoshi, a master woodblock printer from Japan who is most known for his woodblock prints of trees and forests. He developed new woodblock carving techniques that enabled him to reproduce extremely fine details in branches and trunks. I own a book that is a catalog of all his tree prints, have seen a number of them in person and we own five of his smaller prints. His work has been a real inspiration to me.

In 2012 we weren’t able to go on a photo trip so I spent some time now and then looking for photographs within a few miles of home. One sunny late September day I came across this large tree with backlit red leaves. The bold black trunks and branches brilliantly colored leaves and bright light called for a bold composition.

In 1999 Hasselblad introduced a remarkable 40mm wide angle lens, the CFE 40mm IF Distagon. Its MTF specs were truly remarkable (MTF graphs scientifically show lens performance). The lens was just becoming available as we were leaving on a photo trip so I ordered one and had it delivered to a FedEx station on the road for pickup as we were traveling. I didn’t use it on that trip or the one after that. I made some test exposures and confirmed its performance but rarely used the lens.

However, this was the moment to pull the lens out of the case and put it to work. The lens takes in a lot with its 89° diagonal angle of view. I handheld the camera and worked on a composition until I found this image. I put the camera on the tripod and calculated the exposure using the camera’s built in spotmeter and zone system metering and made two exposures on Velvia 50 film.

The angle of view is so great that the branches at the top of the image were actually draping overhead. I used the camera pointed upwards at a steep angle which normally would show as severely inwardly tilted trees but since I put the central trunk in the center of the frame none of that effect is visible.

While I wasn’t trying to emulate Joichi Hoshi’s work, which would be impossible anyway, I was reminded of his dramatic red tree branches on one of his prints which we own. I titled this photograph “Hoshi Red Tree” as an homage to this master printmaker, as it seemed to me that this very tree was much like the trees that had inspired him to make his remarkable woodblock prints.