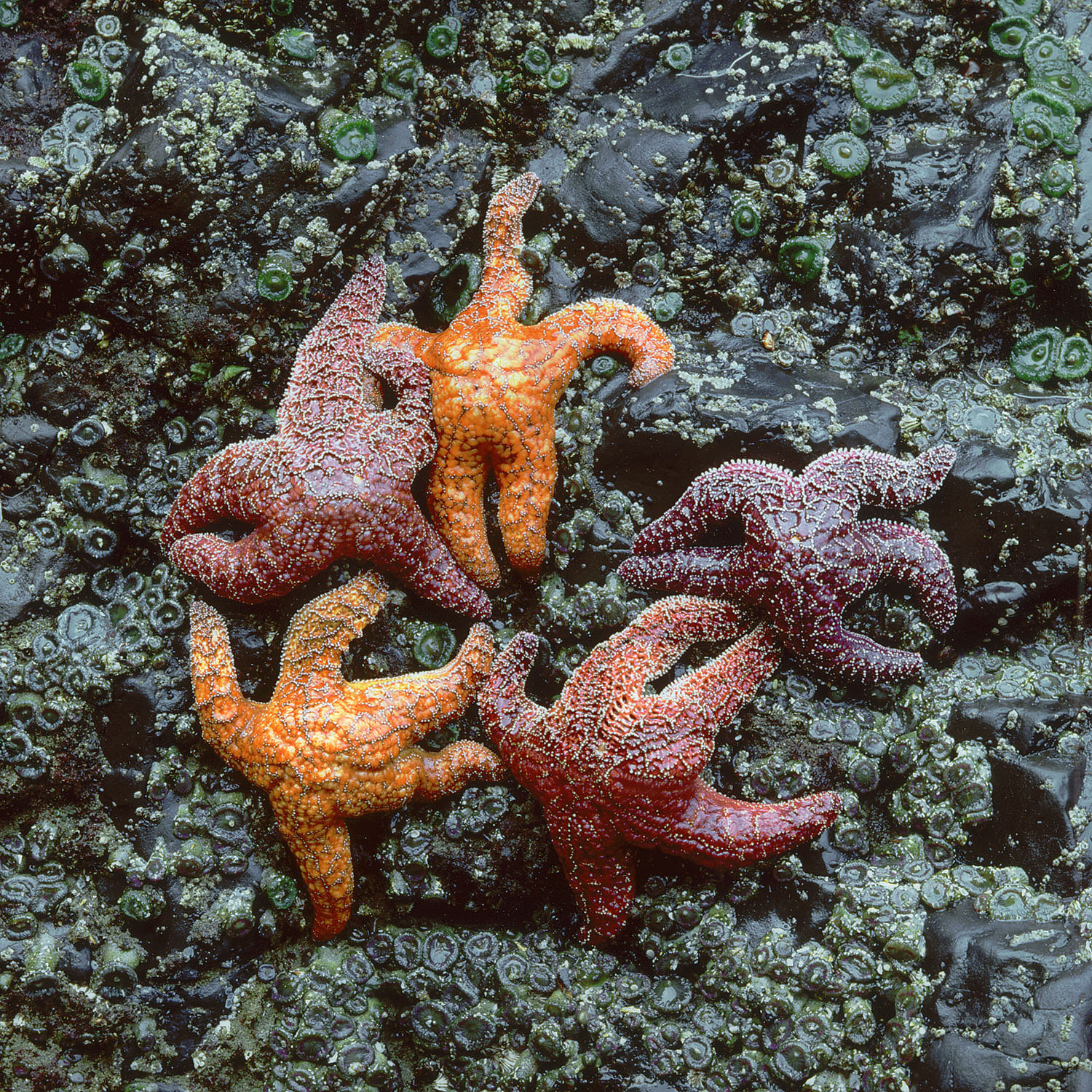 In the spring of 2001, we learned there was going to be an extremely low tide on the Oregon Coast: a once in 20 year event. At the time, we lived in Vernonia, Oregon, which was only about a one hour drive to the coast. So Ruth and I packed up my Hasselblad camera outfit and Daisy and Leo, our miniature schnauzers and headed off a few hours before the big event.

I had spent some time as a child visiting relatives each summer at Seaside, Oregon and had heard tales of how at very low tides, sometime cars would drive around Hug Point and get stuck on the other side when the tide came back in. This seemed like an interesting place to explore for a worthwhile photographic image, since it was rarely unreachable by people and would be in pristine condition.

The owners of the gallery which represents my work in Cannon Beach, Bob and Joyce Necker, offered to meet us at the site to help carry some of the equipment, so we met them there about 1-1/2 hours before low tide. It was indeed an extreme low tide and it was exciting to see rarely exposed rocks and sea life, even before we reached our destination. After about half an hour, the tide receded enough for us to walk around Hug Point and see what would await us.

The scene was very quiet, a small cove with only a few rocks jutting out of the water but all of them completely covered with small sea anemones and other sea life, since they were rarely exposed to the air. The place was isolated with steep rocky cliffs surround us.I was able to find this one large rock which had a visually interesting collection of sea stars, so I took one photo of it with my 250mm Zeiss Superachromat lens. I’ve been asked a few times about this image and no, I didn’t arrange the sea stars, this is the way they were.

While it seemed that we were only there for a few minutes, time passes quickly when one is looking for a photograph and when we started back we discovered that the tide was already coming in and there was no time to lose. Because of the low tide and the shape of the land, there was a deeper pool that we had to cross and had to do it right now.

Fortunately, Bob and Joyce were there to help and they carried two of the camera cases. Ruth carried Daisy in her arms and I held my tripod over my head while I carried Leo under my right arm. We had to time our exit between waves, since the water was about 40” deep. Another 15 minutes and we would have really been in a pickle, since there was no way out behind us.

The only title that seemed to fit was Dancing Sea Stars and it felt that way the instant I saw the composition. The moment and events seemed almost choreographed and when I think back to the events of that remarkable afternoon I can still feel that cold salt water almost up to my hips and the splashing of the waves.