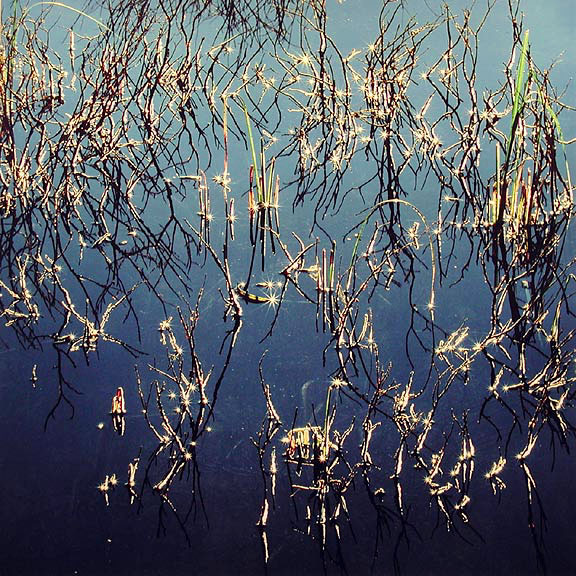 On our photo trip in 1997 we were in Colorado and spent the night in our camper van parked at Lizard Head Pass at 10,000 feet. When I woke up in the morning I grabbed my cup of coffee and went for a walk as the sun was coming up. It was cold out, below freezing and the air was clear with no wind.

There was a small beaver pond near where we had camped out and I noticed that ice had formed overnight on the sticks and grasses in the water. Because we were at this high elevation on the east edge of the mountain ridge, as the sun rose over the horizon it was striking the ice nearly horizontally, reflecting and refracting into hundreds of sun stars. The sun was rising quickly and in a few minutes this unique phenomenon would disappear.

I ran back to the van and brought back my Hasselblad camera with the 250mm Superachromat lens on my sturdy Sachtler tripod. I use the same tripod for my 8x10 camera as I do for my Hasselblad. Even though the medium format camera is much lighter, it’s crucial that there be no vibration when exposing the film to insure the highest possible resolution.

Working quickly, I composed this image, took light meter readings using the in camera spot meter and made a couple of exposures on Velvia 50 film. There was no filter used to take this photograph (I never use filters). The “stars” naturally occur when a bright pinpoint light source goes through a camera lens used at a small aperture.

I made my first Cibachrome prints of this image six years later, in 2003. The prints have remarkable depth and luminosity with both subtle and bold colors and contrast levels.