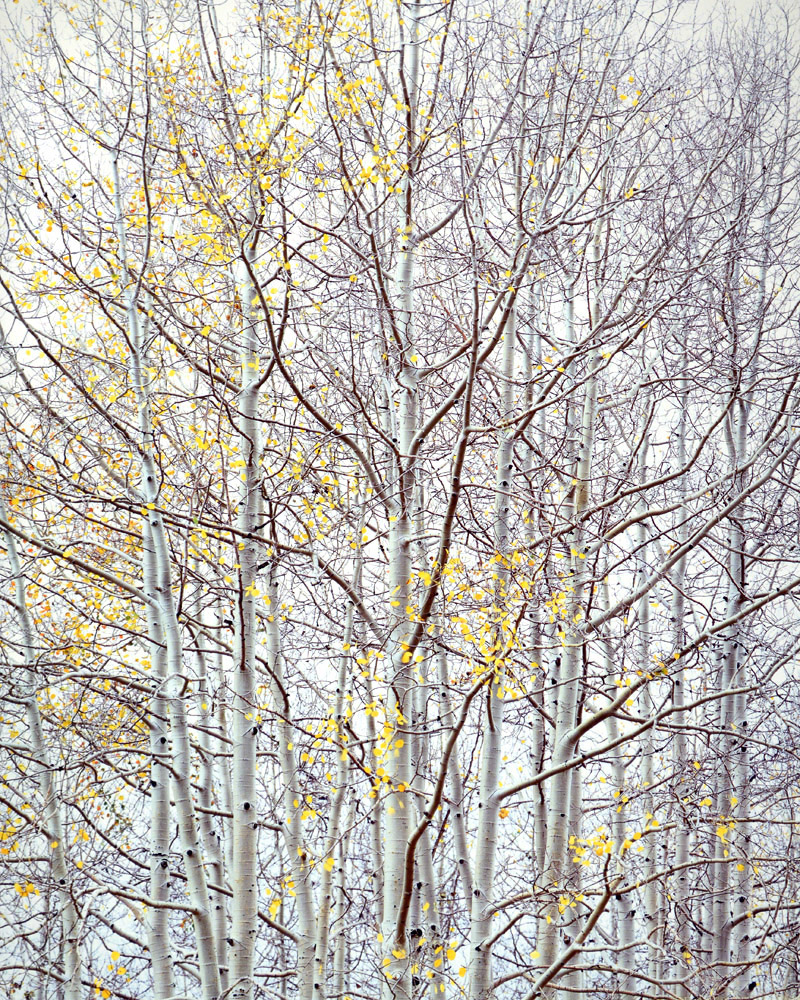 In 2006 Ruth and I went on another cross country photo trip, first stopping in Colorado. When we arrived, the aspen trees were in full color and the weather was sunny and relatively calm. I was able to make some photographs under those conditions in about six days, including “Cheerful Aspens,” “Forest Light” and “Oxbow Aspens.”

But then a vigorous storm, with gusty rain mixed with snow, came in for two days, so we retreated to a hotel in Crested Butte until the storm passed. When we ventured out we discovered that the storm had stripped almost all of the leaves off the trees. That was the bad news. The good news was that the wind was calm and the sky overcast, so there was still potential for some good images.

We loaded up our camper van and headed back into the mountains, finding this tree about ten miles west of Crested Butte. To the casual eye, it might have seemed as though there wasn’t much to photograph here. But from experience I knew that between the soft light and the delicate tonal relationship between the overcast sky, the white tree branches would record quite well on the transparency film. And I knew what I could do with that film in my darkroom to make a luminous print.

One of the unique properties of printing positive to positive images onto Cibachrome, (as opposed to the usual negative to negative printing), is that the tone reproduction curve for Cibachrome print material is much like the tone reproduction curve of transparency film. This has its unique pluses and minuses. In this case, I knew that if I exposed the transparency so the image on the film was darker than I wanted the print to be, I could print the image lighter onto Cibachrome and hold more detail and delicacy in the lightest values than if the transparency was as bright as the print I was visualizing that moment.

I set up my 8x10 camera, which turned out to be difficult because I had to set up my tripod against a steep slope and use the rising front on the camera to the maximum amount to avoid the “converging verticals” effect (the top of vertical items tilt toward the center). A compendium lens shade was necessary to avoid flare from the sky but the only way to confirm that it wasn’t going to vignette the image was to remove the camera back and examine the aerial image.

Using my spotmeter, I placed the lighter trunk values on Zone V, middle grey, knowing I would reproduce those tones on the final print about 1.5 stops brighter, on Zone VI 1/2. As is often the case, I made only one exposure of this image, confident the exposure was correct and the wind was calm. When I later examined the processed film in my darkroom I knew the image had potential but it wasn’t until seven years later that I finally printed the image for the first time.

I spent three full days working on making a print that expressed what I visualized and felt when I first saw the tree. It took a lot of re-dos on the contrast masking and many full size work prints to fine tune the color balance since the colors and tones are quite delicate.

I titled it Aspen Ethos because for me this image could have the feeling of an archetype of the great aspen forests of Colorado and the west.